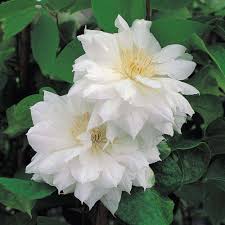 The Duchess is an unstoppable showoff, quickly climbing any arbor or trellis to display massive 4-6" double blooms with feathery petals layered on top of each other. The outstanding pure white blossoms first appear in early summer with a second flush in late summer that are semi-double or single-petaled. Grows to 8-10' tall. Plant in full sun to partial shade in well-drained soil. Mulch to keep roots cool and moist. Ships in 3" pots. Zones 3-9. Clematis 'Duchess of Edinburgh' . Deer tend to avoid.

Bloom Time: Late April - Late May (may rebloom in Fall)

Pruning Group 2 – Early to midseason flowering cultivars and rebloomers. These varieties begin to bloom in early summer, with the first flush of flowers appearing on the previous year’s growth. This is followed by a second flush of flowers appearing on the new growth. These flowers will likely be smaller than the first ones and flowers that were double the first time may be single the second time. The time to prune this group is in late winter or early spring. Dead and weak shoots should be removed and the remaining shoots cut back to 6-9 inches above a couple of well-developed buds.